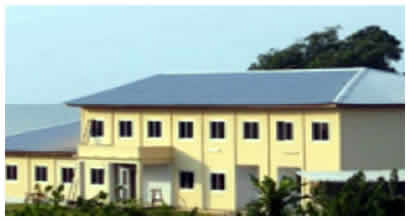 It is located in Kribi in the Ocean department of the South Cameroon region. Three branches are attached to it, namely: the Ebodjé Branch, the Édéa Branch and the Lolodorf Branch.

Research activities within the Station are carried out in five (05) multidisciplinary research units (URP) which are organised around research themes of interest for the marine and coastal area.

To study the coastal and sedimentary dynamics of the southern coastal strip of Cameroon..

- Identify the human activities responsible for the acceleration of the erosion phenomenon along the coastal fringe;

- Characterise and quantify the coastal currents and the sedimentary materials carried by these currents;

- Assess the evolution of the coastline;

- Draw up a map of the erosion and accretion zones in the southern part of the Cameroonian coast;

- Propose a development plan and adapted works for the Cameroonian coast.

To carry out the systematic ecology of Synodontis fish and their parasites: proposal of ways of culture.

- To make an inventory of Synodontis species and their parasites.

- To carry out the ecology of the fish and their parasites.

- Identify the impact of abiotic and biotic factors on fish health and avoidance methods.

General Objective: evaluate the economic and nutritional benefits of using poultry droppings for the production of maggots and earth worms as supplementary diets for fish and broiler.

- To investigate the cost benefit of supplementing fish and broiler feeding with fly larvae or earth worm; and

- To investigate the impact of supplementing fish and broiler diets with fly larvae or earthworm on carcass quality.

To evaluate the exploitation of fishery resources in the two large landing stages of the ocean.

- Identify the different species landed and their proportion of the catch;

- Make an inventory of the fishing gear used.

General Objective: to provide the basic elements for the domestication and production in captivity of crab of the genus Portinus Validus.

- Improvement in the formulation of feeds based on local by-products and improvement of formulation strategies at different stages of growth.

- Examination of the potential of Portinus Validus crabs by determining the possibilities and modalities of rearing / growing of the species.

To provide the basic elements for the domestication and captive production of PortinusValidus crab.

- Examine the potential of Portinus Validus crabs by determining the possibilities and modalities of rearing / growing the species.

To evaluate the performance of microalgae strains from the Mpalla mangrove on Farfantepenaeusnotialis and Melicertuskerathurus shrimp larvae''.

- Determine the duration of eggs from laying to hatching; and/or

- Determine the different larval stages (from nauplii to the first post larva).

E-Mail :This email address is being protected from spambots. You need JavaScript enabled to view it.